Skip to Content
Home / Blog / Life / A Menu, a Few Southern Delicacies, and a Flood of Memories 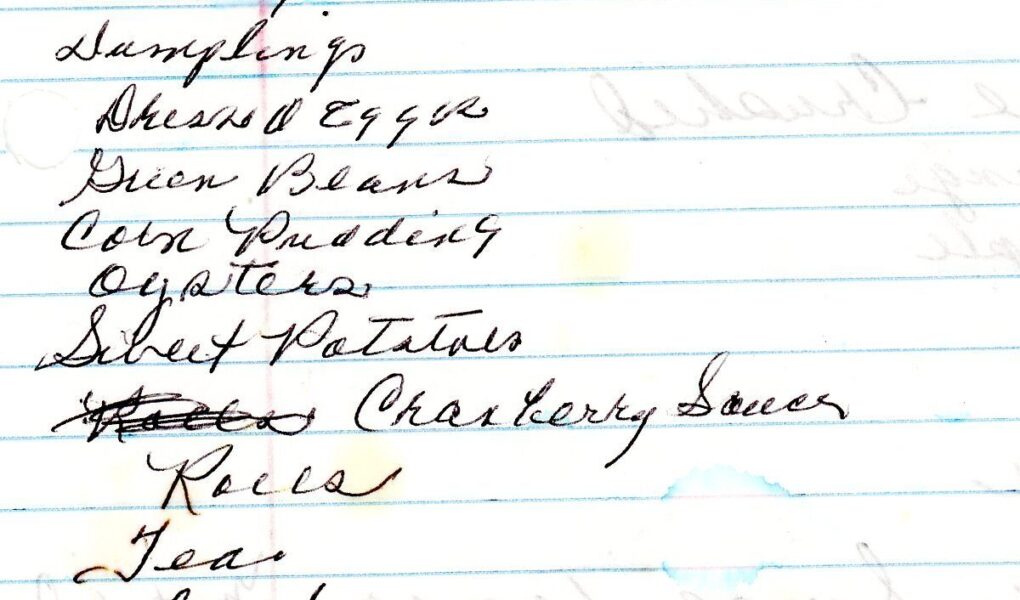 I wouldn’t have called Grandma a fastidious record keeper. I’m not even sure that she kept records beyond the little notepads that we found beside her chair, full of abbreviations and phone numbers that only made sense to her. The day before her funeral, I opened a kitchen drawer and found her recipes; a collection of paper scraps and envelopes containing her greatest hits.

Tonight I sat down to sort through them and didn’t get past the first one. It was a menu. My family’s menus for Thanksgiving and Christmas look remarkably similar so I wasn’t sure which holiday this one referenced. After consulting with mom, we decided that it was probably Thanksgiving from about 13 years ago. It was the last holiday meal that she cooked for the entire family and I had the good fortune to be present.

I love everything about this menu. It’s a reminder of the love and thought that Grandma put into her cooking. It’s also a perfect slice of central Kentucky cuisine. The turkey is a given and anyone from anywhere in the US would recognize it. The ham would have been salt cured, probably from Clifty Farm, and sliced thin; not quite prosciutto thin but not far off either. Everything else might need some explanation.

Dressing was always dressing and not stuffing because 1) stuffing things in a bird’s carcass and then eating them later is disgusting and 2) the turkey was always cooked the day before and eaten cold because, well, dumplings. I could write for days about these tender squares of flour and milk. They aren’t quite noodles and they certainly aren’t those doughy goo balls that Northerners drop in boiling water. They are perfectly simmered in the drippings of the aforementioned turkey and can also act as a kind of gravy for the turkey and dressing. At least that’s the way that I eat them. Also note that some folks, my grandfather among them, refer to dumplings as “slickers” because they slide down your throat.

Dressed eggs, not deviled eggs, appear at nearly every family event. They are “dressed” and not “deviled” because folks don’t want Satan all up in their festivities. That might also be the reason that there was never anything stronger than sweet tea served but I digress.

The green beans were green beans, not casseroled with cream of something and topped with fake, crunchy onions. Sure, they would have been cooked with a ham hock for so long that they lost any nutritional value but they were about as naked as anything else at the meal.

Corn pudding; you’ve got to know it to love it. Whole kernel and/or cream style corn are mixed with milk or cream and butter and baked to a lovely golden brown. The resulting dream food is firm enough to be scooped out of the dish while holding its shape but soft enough to ooze a little bit into its neighbor on the plate.

The oysters would have been casseroled (bless their hearts) and some folks would refer to them as scalloped. In my family, they are just oysters. If you’ve never had this delicacy, I need you to stick with me on this one. Also, I need you to lower your expectations…lower….lower…a bit lower…there, that’s it. These are not the half-shelled delights of high-end restaurants or the deep-fried delicacies from a Po’ Boy. These oysters are dumped from a can and mixed with milk and butter. The slurry is topped with saltine crackers and baked until set. Even within my family, oysters are divisive. You either love them or hate them. I hated them for a great while but I’m telling you that if Grandma walked through the door right now with a casserole dish of oysters, I would grab a spoon and dig in.

If you thought that corn pudding sounded more like a dessert than a savory side, then let me introduce you to “sweet potatoes.” The more I read this menu, the more I laugh at the understatement. Nothing is ever just a vegetable or a fruit and the sweet potatoes are no exception.The rest of the world refers to these as “candied” but to us they are sweet potatoes, with an emphasis on the sweet (of course). To make this dish, you first take nature’s candy, add brown sugar, vanilla, and butter and then top with marshmallows. The result could stand on its own as a dessert but also, somehow, works just as well nestled between dressing and corn pudding. It also adds a pop of color between the two yellow foods.

We’ve reached a low point on our menu; cranberry salad. If you’ve ever looked at the jiggly stuff in the can and thought that it could use a little crunch, you are wrong, and I’ve got just the recipe for you. This dish is legendary in my family and most of the cooks have several different copies stashed in various locations. In fact, Grandma had written the recipe on the back of this menu. No doubt, she had called her sister-in-law or my mom in a panic when she couldn’t find her previous copy.

This sauce/salad is an insult to all sauces and salads before and since. It starts off well enough with canned cranberry sauce but it quickly goes off the rails with the addition of cherry flavored Jell-O, apples, pecans, lemon or orange juice (because it’s a choose your own adventure of flavor!) and celery which we all know is the devil’s vegetable. The result is a crunchy, fruity, tangy, and stringy mess of red goo. I miss Grandma every day. That cranberry sauce though? Not so much.

The menu is rounded out by rolls, the standard premade supermarket variety because after cooking all that other stuff who has time for yeast? There is tea, sweet of course, because after the corn pudding and sweet potatoes you can’t possibly convince me that you are worried about calories or diabetes. I think the coffee must be medicinal with the caffeine used to bring back diners from the edge of a sugar coma. And then there’s dessert. I don’t know what the dessert was on this day. Maybe Grandma consented to let someone else contribute. Whatever it was, I know that it was made with a lot of butter and a lot of love and that it was delicious.

In February, Grandma left us suddenly. Her loss has been particularly hard on me because, due to COVID, it had been nine months since I had seen her and even then, I didn’t hug her. Her death became the start of a long goodbye for me. She was never one to tell stories about the past so I’ve been trying to piece together stories based on the things she left behind. While she did have some valuable things, I think that this menu and her stash of recipes are priceless because of the memories and feelings that they evoke. They also make my mouth water and can you actually put a value on that? 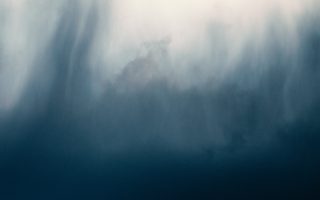 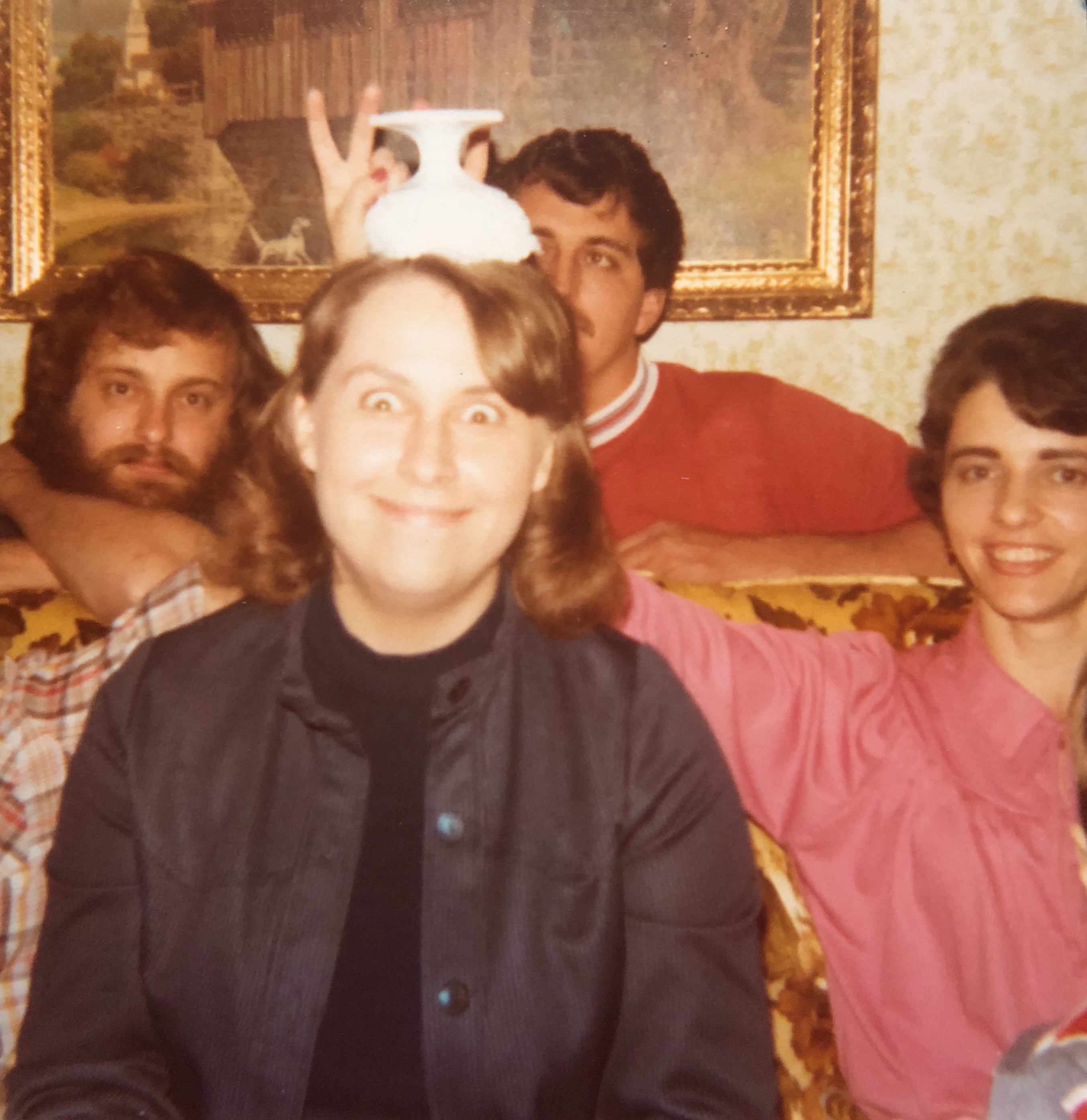 Aunt Carole and The Gift of Laughter